Who had a computer in the 1980s? If you did, it was probably a Commodore 64, or maybe a Spectrum, or perhaps one of Sir Alan Sugar’s Amstrads. Really early adopters might have had a ZX81, schools had Acorn Electrons and BBC Micros.

They seemed great, they were great at the time, but you wouldn’t swap your modern laptop or Mac for one now, would you – not if you needed to get actual work done rather than play Jet Set Willy.

What about cars. Thinking of cars in the 1980s brings back memories of huge 3.5 litre Rovers, Austin Maestros and Ford Escorts. All fine cars, but they also had tape decks (at best), dodgy interiors and engines that wouldn’t seem optimised or efficient by modern standards.

If, nowadays, you drove a 1980s car to and from work and then logged into a C64 you might feel you were missing out on the latest technology. You’d be aware that things had changed, yes you had a car and computer, no they weren’t much use.

The same applies for conservatories.

In the 1980s, conservatories were rubbish – admittedly they were rubbish then, they never had the appeal of a Peugeot 205.

This early version of conservatories had one huge flaw, the roofs were unfit for purpose. Anyone buying a conservatory had two choices, glass or cheap, plastic polycarbonate roof. The price tags might have been different, but the key flaw was consistent – neither material can regulate temperature.

In summer, any conservatory was too hot to enjoy, becoming a virtual sauna. In winter, they were nigh-on impossible to heat, only usable with the heating on 24/7.

Conservatories – Not Acceptable In The 80s

The conservatories also looked like a bolt-on to the rest of the house, making little effort to blend in.

And, while old computers – if not old cars – might have a retro value that has seen them increase in value, that certainly is not true for conservatories. A conservatory built in the 1980 adds no real value to a property, if anything any would-be buyer will see it as a problem, something they might need to dispose of.

That has all changed. 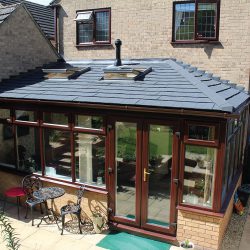 A modern conservatory is an asset worth having, you can even set it up as a home office, perfect for working on that nice modern laptop.

The roof can now be a solid, lightweight tiled roof – this can be fitted as a replacement roof on any existing conservatory or built into a new conservatory build.

This one change has a profound effect, it turns the conservatory into a room that isn’t just usable all year round, instead it is a great space whatever the weather.

In many cases, a modern conservatory is a home improvement that pays for itself, this through a greatly increased asking price should you ever look to sell. They also lead to energy bill savings, independent research by AECOM finding that a conservatory with a lightweight tiled roof cost £200 per year less to heat than one with a glass or polycarb roof.

At Guardian, we are the company who developed the solid, lightweight tiled roof that led to regulatory change, making this type of roof permissible.

We produce a roof that comes with a lengthy guarantee, is only ever installed by approved fitters and can be installed in just three days – that including removing and recycling the old roof.

You wouldn’t judge computers by the standards of that decade, or cars, or music or comedy for that matter. Have a look round this site to find out how conservatories have changed as much, if not more, than anything else.

To get in touch for further information or to arrange an obligation free quote, please call us on 0800 066 5832 or use our Contact Form.